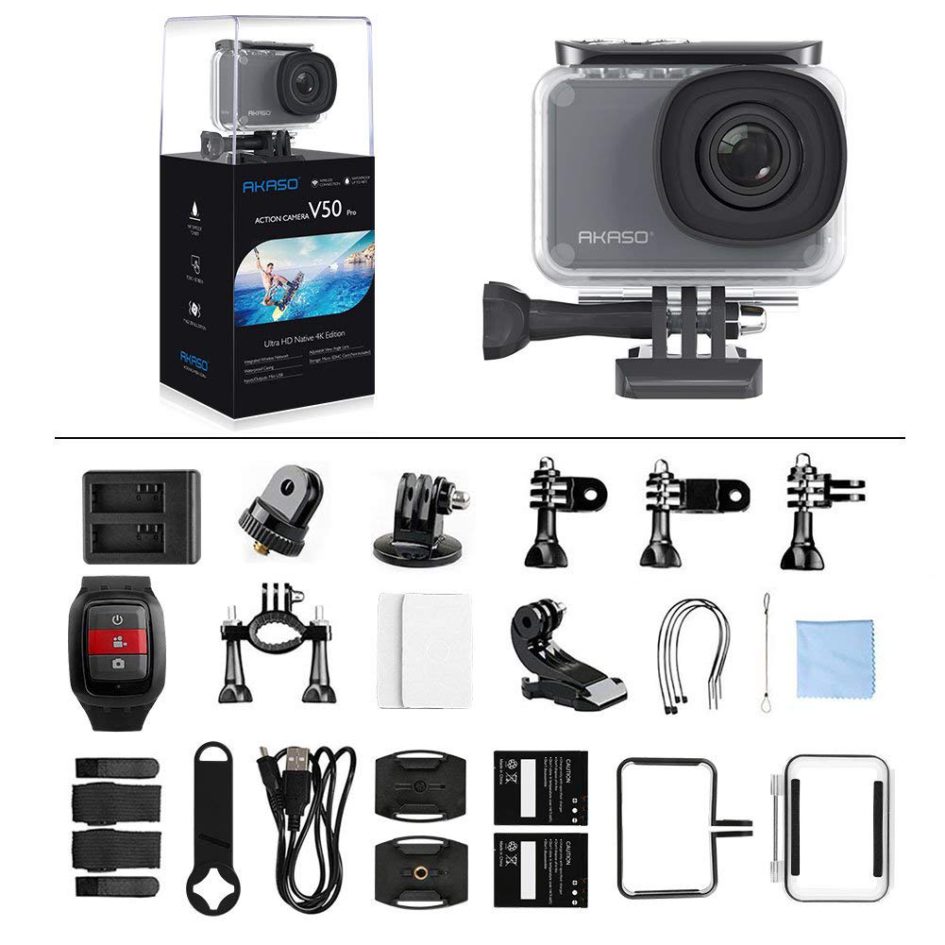 Known for their technically superior models, fantastic performance and ease of use, GoPro action cameras have been the industry-leader for quite a while now.

If you are diving into the action camera market just now, chances are you have heard a lot about GoPro.

But the company’s products are quite expensive, and as an amateur, spending over $250 for a half-decent camera may seem absolutely unnecessary. And it is.

Akaso is one of those upcoming companies that are manufacturing dozens of GoPro clones, and flooding the market with relatively inexpensive alternatives.

Hence, their products are user-friendly and easy to operate, without any overtly fancy specifications.

While this strategy makes the products cheaper than others in the category, it also enjoys the advantage of catering to a much wider fan base, thus boosting sales and profits.

Action cameras are primarily meant for capturing images and videos on the go. One of the most popular uses of action cameras is its ability to capture nice aerial footage while being attached to a drone.

Interestingly, if you own an Akaso action camera, you do not need to think beyond the company for purchasing a drone.

While Akaso drones like the A200 and A21 are not as widely used as the Holy Stone or the DJI, they do work just fine.

Last year saw Akaso releasing a handful of action cameras with native 4K recording – a feature that has since taken the action camera world by storm.

The V50 Pro is, arguably, the best among them. At a very competitive price on Amazon, it offers specs similar to top end GoPro models.

But does it perform as well in real life as it looks on paper? Let us find out through my details Akaso v50 Pro review.

Akaso V50 Pro and Elite were released in quick succession, and not surprisingly, both the cameras share mostly identical features.

However, the specifications are slightly better on paper for the Elite version, and thus, it costs $20 more.

Both cameras work with the same chipset and lens. The V50 Pro uses Panasonic 34112 sensor while the V50 Elite uses Sony IMX 078 sensor.

Check my review of the Akaso v50 Elite HERE

The V50 Pro maxes out at 4K at 30 fps while the Elite version offers 60 fps in the same resolution.

The Pro model also does not have 8x zoom.

But the fact that both cameras come with dual batteries along with the ability to record videos while charging nullify this issue.

In reality, the Akaso v50 Pro seems to offer more accurate colors than the Elite which renders a slight greenish tint to images and footage.

It does not harm the image quality significantly – and in fact, seems to improve it a bit – but if you are obsessed with capturing natural colors, V50 Pro is the way to go.

Also, the internal mic in V50 Pro produces a better audio quality as compared to that produced by the V50 Elite mic.

Overall, despite priced lower, the Akaso V50 Pro does appear to be a better value for money than its Elite counterpart.

At first glance, the Akaso V50 Pro looks simple and sleek. It is a bit smaller than the Akaso V50 Elite but it is about the same size as recent GoPro models; so you do not have to worry about purchasing separate accessories for this action camera.

The outer body is made of rubberized plastic that renders it a premium look and does well to prevent scratches and abrasions.

This holds a lot of importance, since action cameras are extremely prone to rough usage, and consequently, scratches.

The front of the camera flaunts the lens along with the brand name on the lower left.

Beside those, there are the microphones and the Wi-Fi LED indicator.

On the left, there are ports for mini USB, HDMI and a slot for the SD card. The Akaso V50 Pro can support an extended memory of up to 64 GB.

Granted that most of its competitors in the market offer 128-256 GB of memory at this price point, in reality, 64 GB is still enough to stop you from running out of space for your files.

The speakers are located on the right side. The battery goes at the bottom compartment that has a rubberized cover to keep away water.

At the back, the camera has a 2 inch touchscreen LCD display. The viewing angles are great with this one, and the screen is bright enough to save you any trouble while shooting outside in daylight.

The touch-based interface is intuitive and responsive, and works surprisingly well for an action camera.

Akaso brought 4K resolution in the V50 Pro, but limited the frame rate to 30 fps. To put that into perspective, the V50 Elite boasts of a highest limit of 60 fps in 4K and costs just $20 more.

But is it actually worth the extra bucks? We don’t think so.

Firstly, the electronic image stabilization does not work with 60 fps in 4K in the V50 Elite, so you will have to record in 30 fps if you do not have a gimbal at your dispense.

Secondly, as a regular action camera user, chances are you will be recording most of your videos in 1080p.

This is a popular resolution among action camera enthusiasts because it radically decreases the file size of videos without having a significantly poorer quality than 4K.

This camera supports image stabilization (EIS) for all resolutions, and you won’t have to worry about getting a gimbal for this.

The EIS performs well to remove camera shakes, but if you are picky about this feature, you may consider using a dedicated gimbal for the same.

Just like the V50 Elite, the Akaso V50 Pro comes with the ability to keep recording even while charging.

This is a great feature to have if you love to capture time lapse videos. You can simply use your power bank to charge your phone when the battery gets low without worrying about pausing the video.

This is, however, expected for a budget of $120. If you are looking to shoot mostly at night, this is not the camera to buy.

But if you like to record daytime videos, the V50 Pro is worth your consideration. That said, for an action camera, the photos look too good.

The V50 Pro comes with a Drive mode under the video settings. This helps you to record better while you are driving.

The camera also supports both H264 and H265 formats of recording. The H265 format is recent technology that consumes much lesser storage space than the older H264 version.

Read about the difference between H264 and H265.

This implies you can store more files in your device using the H265 format without worrying about losing video quality.

The sound quality is where Akaso hits the bull’s eye with this device. Unlike the other cameras from the company, the V50 Pro does a fantastic job with the microphones.

Of course, it is not meant for recording live concerts and operas, but it performs pretty well outside in traffic and in presence of a lot of background noise.

The V50 Pro offers a far more responsive touchscreen than any other Akaso model. It is not as seamless as a smartphone touchscreen, but it certainly does an amazing job for an action camera.

It also provides you the choice of remote control. The wearable remote is included in the Akaso package and works well up to a small distance.

Setting up the remote control may take some time initially, but once you are past that stage, it will be much easier to control your camera from a distance without using your hands.

The V50 Pro supports both Bluetooth and Wi-Fi connectivity. You can control your camera from your smartphone by downloading the iSmart Pro+ app from the Apple App Store or Google Play Store, and pairing up your phone with your camera.

Once you have done that, you will be able to see everything that your camera sees directly on your smartphone or tablet screen.

While the connection stays reliable up to a distance of 10 meters, going beyond that may result in disconnection.

If you have plans of using the camera from far away, you may have to look at other options.

The app interface is not complicated at all, and you will find it very easy to get accustomed to the controls.

The app displays all the information you see on your camera display and makes it easy for you to perform the basic functions hands-free.

One of the best things about Akaso is the large number of accessories it packs along with the main action camera.

The V50 Pro comes with a Bluetooth remote control, a waterproof case, a bicycle stand, seven mounts, a clip, a helmet mount, a bandage, five tethers, a protective backdoor, a USB cable, a lens cloth, and of course, a user manual.

It must be remembered that although the tiny V50 Pro is slightly smaller than the V50 Elite, all the accessories are interchangeable, and you won’t have to worry about buying separate mounts ever.

Also, Akaso packs in as many as two 1100 mAh rechargeable batteries inside the box.

They offer almost double battery life than the 1050 mAh batteries used in the V50 Elite.

The charger is included in the package, and you can always plug in your charger without worrying about stopping your recording as the camera charges.

Here’s a Youtube video by Redskull showing the Akaso v50 Pro in action:

If you are a beginner diving into the world of action cameras, the Akaso V50 Pro is, hands down, the best option for you currently.

Not only does it offer you great performance at $120, but also gives a stiff challenge to cameras worth much more.

It would be foolhardy to expect premium functions from an entry-level camera as this, but the V50 Pro is as close as it gets.

It does not have a reasonable disadvantage at present, and was touted as the best low-range action camera to buy in 2018 by several pundits.

On the other hand, native 4K recording at 30 fps with built-in image stabilization and LDC image correction sets the bar high up.

It also comes with ultra wide-angle lens that lets you capture a wider picture. The large number of customizable options, responsive touchscreen display, wireless remote controller and default filters make up the rest of the pros.

Also, the double batteries provided and the option of continuing recording while charging may be enough to seal the deal for you.

Overall, the camera is handy, provides the best quality videos, images, and sounds that you can hope for at this price range, and comes with all the basic accessories you need.

Considering the pros and cons, the former clearly outweighs the latter, and there is no reason why you should not buy the V50 Pro right now.

I hope you liked my Akaso v50 Pro review! Please let me know what you think of this action camera by leaving a comment in the section below 🙂