Learn All About The Drift Ghost 4K Through My Detailed Review! 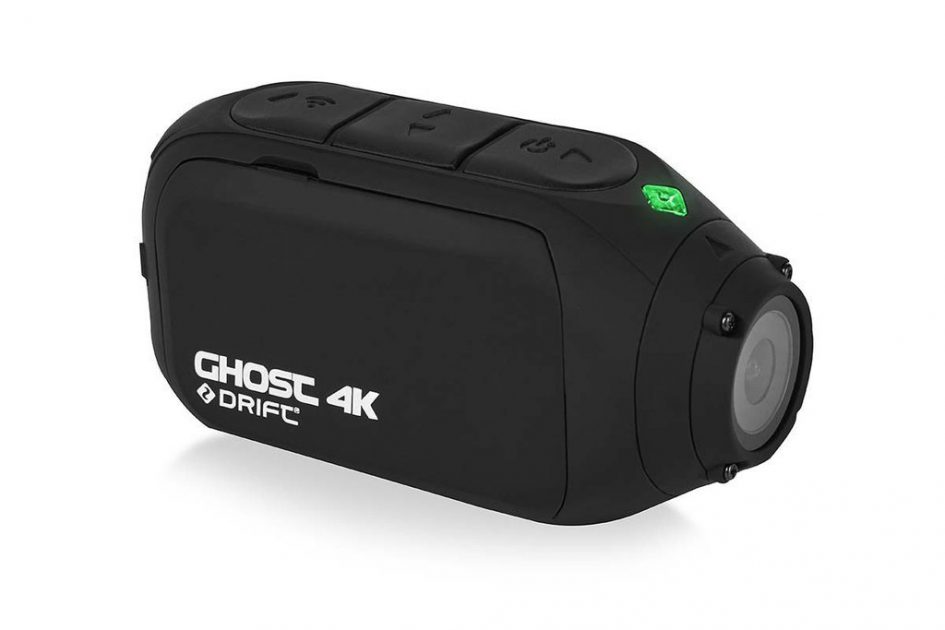 The extremely popular Ghost series offered by Drift continues with its latest offering, the Ghost 4K! I couldn’t help but write a detailed Drift Ghost 4K review which will explain to you in detail all you need to know about this action camera.

This action camera also excels in photo capturing, as it can shoot up to 12 megapixels, individually or in bursts.

In this article, we will be talking about everything there is to know including all the important specifications and features of the Drift Ghost 4K action camera.

Its design, video, audio and photo quality, resolutions and frame rates, controls, battery life, price, and comparison with the GoPro Hero 6 Black will be discussed in detail.

Read on to know more about the Drift Ghost 4K action camera through my review.

The Drift Ghost 4K action camera features an LCD screen, which is important because it allows you to set up your shots, change the settings, and quickly playback the photos and videos to check if you got the shot you are aiming for. Here’s a link to a detailed user guide.

It also has a standard quarter-inch mount that offers you a variety of mounting options. The action camera measures 1.3 x 2 x 4.1 inches and it weighs around 6 ounces.

It can be strapped to the side of your goggles or helmet and it can cover a field of view of 170 degrees that comes with a wide and distorted view.

It should be noted, however, that you must be careful about the mounting because you may crop off a side of your video with whatever it is you used to attach the action camera.

You will find the battery, ports, and the memory card slot at the back of the action camera. You will also find a mini USB port that will allow you to charge the camera and transfer files from the camera to your computer.

It also features an HDMI port and a 3.55mm jack that you can use to connect an external mic. The action camera includes two cover hatches: one is waterproof while the other one is only splash resistant, used for covering the USB port and mic jack.

With the Drift Ghost 4K’s price, it is only reasonable that you expect great video, audio and photo quality. After all, you are paying the price due to the features alone.

Generally, the videos are of very good quality, as a lot of its consumers were pleased with the results. Its 1080p resolution video exhibits detail without it seeming like it has undergone extreme post-processing.

However, you should be aware that if the scene has a lot of movements, you might notice artifacts, as well as a significant loss of detail.

The color quality on the Drift Ghost 4K action camera is not as powerful as its leading competitors but compromises on its white balance features. You might also find aliasing artifacts and a fair amount of chromatic aberration during high-contrast captures.

In addition, you will also notice an increase in noise when shooting in low light conditions. While this scenario is not at all unusual, you will still be able to find well-lit indoor videos watchable.

If you are considering to drop the resolution, it would cost you a significant loss of detail. However, when shooting in 720p at 60 fps, the result would still be pretty good.

Overall, the footage is still above average considering the flexibility and features of the action camera. The audio has also been proven to have a good quality. The built-in microphone, specifically, does a decent job due to the three levels of sensitivity adjustment.

In addition, you can always plug in a better external microphone, which is a feature you cannot do with other action cameras.

As with many action cameras, the Drift Ghost 4K takes video a lot better than photos. You will be able to capture great photos for online sharing or small prints but you cannot do high detail enlarging, as well as heavy cropping.

The 4K quality of the action camera is unbelievably stunning and you can watch this footage on a 75” screen.

The higher frame rates improve the overall production value that results in significant enhancements, especially in motorcycle footage wherein a moving subject is moving across the screen at full speed.

One major issue and considered a downside, is the blocking effect that is apparent in both the following and on-board footage. This has never been a problem with the GoPro, which is the reason why a lot of consumers are expecting an upgrade to the newer Drift action cameras.

The remote control is one of the most advanced and coolest features of the Drift Ghost 4K action camera. It is very easy to operate, as you only need to scroll and activate it and pair it with the action camera.

Once there is a confirmation that the pairing has been successful, then you are good to go. Interestingly, it is also a watch that has an indicator of what mode are using the camera for.

A green light would mean that you are in video mode, yellow on photo mode, purple on time-lapse mode, and cyan on photo burst. With this feature, you will be able to cycle through the settings once you have set up the camera.

You will find 3 buttons on top of the action camera and a small display screen at the back. The buttons at the top include the power button and picture/video operation that allows you to start and stop capturing.

The middle button, on the other hand, permits you to switch in between the settings and modes. In addition, the button found at the back allows for the Wi-Fi activation.

The LCD, as mentioned above, is one of the greatest features of the Drift Ghost 4K action camera. It allows you to control most of the action camera’s settings. For example, swiping down will permit you to check out the pictures taken.

You can scroll through the photos and delete them with ease. Swiping your finger right, you will be granted access to all the features and functions such as the field of view, ISO, BIT, Wi-Fi, battery life, power modes, and camera modes.

The Drift Ghost 4K action camera is equipped with 1500mAh battery and can be charged via USB. You will also be able to extend the battery life with an external battery.

The action camera will not run out of juice for up to 3-hour recording time at 77°F temperature. In addition, it features a removable battery, so you would not need to worry about not finishing your footage.

The Drift Ghost 4K action camera is already considered a high-end camera, as it is priced a little over USD 300. With the features reviewed above, you should not be expecting anything less from this action camera.

A standard box included in every purchase includes the following: The Drift Ghost 4K action camera, a universal action camera clip, a remote control and its strap, a mini USB charging cable, a USB microphone adapter cable and converter, an instructions manual, a flat adhesive mount, and a curved adhesive mount.

With the mentioned accessories, it is a guarantee that you will be getting a great value for the price you pay.

One downside, however, is the features. There are several reviews on the Drift Ghost 4K camera with regards to its price and the lack of features compared with other action cameras.

For some, this action camera is priced a little higher that one would expect far better quality and attention to detail. In my honest opinion, it does not really exhibit quality engineering.

Here’s a video by GRBiker showing footage from both cameras recorded on his bike:

In this section, a comparison between the Drift Ghost 4K action camera and GoPro Hero 6 Black will be discussed in detail. In the end, you will be able to weigh each model’s difference, allowing you to better evaluate your options.

While both had fixed focus, the Drift Ghost 4K action camera features a 19.7”/50cm minimum focusing distance and ultra-wide angle of view, unlike the GoPro Hero 6 Black.

In terms of exposure control, both cameras are not equipped with shutter speed, photo ISO range, video ISO range, and streaming ISO range.

However, center-weighted exposure metering and Bluetooth are featured in the Drift Ghost 4K action camera.

For the features, both cameras have digital image stabilization, built-in microphones, and speakers but do not have white balance modes and creative effects.

For connectivity, the Drift Ghost 4K action camera features 1 USB Micro-B while the GoPro does not. Both have microphone inputs so you can use an external mic.

In addition, I hope that the brand will have improvements on a lot of specific features to make their product a little tougher.

It is also interesting to know that a lot of consumers have raised concerns and it seems like the manufacturer is only testing their products for paying customers.

While the price is certainly an issue here, it does have the best features that make it stand out with other lower-end action cameras.

They are smaller and lighter than most action cameras but they do not seem rugged enough.

With the reviews presented above, I hope that you have learned a lot about the Drift Ghost 4K action camera.

If you’re looking for a cheaper and lower option from Drift, you can have a look at the Drift Ghost X or the Ghost XL which are both good quality 1080p action cameras.