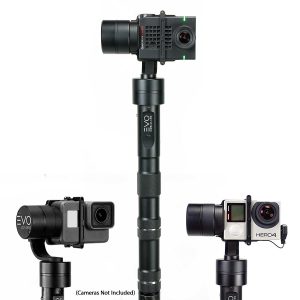 Before I go in detail in my EVO GP PRO 3 Axis Gimbal Review, let me give you some information about gimbals and how to choose the perfect model for your needs.

A gimbal is a device that is used to preserve a camera level by permitting it to pivot on an axis. Gimbals are extensively used as an alternative to tripods when there is a specific need of mounting cameras to unmanned airborne vehicles such as drones.

The use of gimbals is vital for drone professionals for capturing a stable and consistent video footage without any vibration or agitation.

What is a brushless gimbal?

Brushless gimbals are the most common type of gimbal in the industry today intended for capturing aerial footage using drones.

The brushless motors make use of tightly wound wire on each tooth present in the motor thus they can make extremely minor, angular movements with high precision. This gives the impression of “fluid” movement in the camera shots.

Gyros are sensors that estimate rotation speed and accelerometers identify the position of the camera with respect to the drone. The built-in software makes use of sensors to make any required corrections to the camera position to assure it stays level.

There are a lot of different brushless gimbals available to purchase in the market. A prevalent choice is the Solo Gimbal which was designed with GoPro for smart working and full camera control.

What are servo gimbals?

Servo powered gimbals can be an inexpensive substitute to brushless gimbals. Yet, in spite of their ease of use and speedy setup, they usually don’t offer the precise level of steadiness that brushless gimbals do.

Some of the several problems of servo gimbals are jittery footage and a low precision – both of which are the type of issues that you are trying to evade by using a gimbal!

So, which one is better-a brushless gimbal or a servo gimbal?

Just like mentioned above, due to their stabilization problems, servo gimbals are only suggested for aerial photography; if your project requires a consistent video then a brushless gimbal would probably be the best choice.

Servo gimbals are normally lighter than brush-less gimbals; hence they aren’t capable enough to handle much weight. This may be appropriate for smaller cameras such as an 808-keychain camera, but in case you’re using a heavier and smart camera such as a Panasonic Lumix GH, it’s not worth the risk.

Nobody would like to see their gimbal arm break off while airborne and their camera come crashing down to the ground.

Reasons to use a gimbal with your drone:

Buying Guide-A few things to Consider Before Buying a Gimbal

Before choosing one from any of the numerous Gimbals out there with different features and specs, you might want to consider the following factors when picking one out. You can also check my 12 best GoPro gimbals for 2017.

Battery timing is the main factor to be considered while buying a gimbal camera. The Pilotfly consists of an internal battery that can operate as long as one hour and 40 minutes, but unfortunately the internal battery isn’t easily replaceable in the field, replacing it takes around 15 minutes with tiny screws that can get lost and it’s difficult to stuff the power button back in its correct position before you seal it up again. The Came-TV and Team Rebel Design units have designed batteries which can be swapped out in less than a minute.

Generally, speed on location is everything, if I am aware that I can take my camera off the tripod and mount it on a gimbal in less than two or three minutes, obviously, I will use the gimbal a lot.

On the other hand, if the mounting procedure slows down by a few extra minutes, one will use the gimbal far less. If you rarely change the lenses on the gimbal, then this may not be an issue for you. By far the Came-TV is the fastest to balance the camera throughout a lens change on account of its tool-less design.

Keeping the gimbal as lightweight as possible is a controlling feature because the lighter it is, the longer you can possibly film.

While the tool-less design of the Came-TV Single is much impressive, the design still comes at the cost of weight. The attractive thing about mirror-less cameras such as the Sony a7S is the camera being light.

As an example, a full-size Ronin with a Red Epic camera can just be used for about 5 minutes before having it to rest, but a Pilotfly with a Sony a7S can be used up till a limit of the 30-minute record time limit.

The initial gimbals that were introduced in the market used 8-bit boards, now the latest gimbals are generally 32 bit. So, the question is: Is 32 bit much better than 8 bit?

If you are not overturning the gimbal upside down or holding it at extreme angles there isn’t any difference between the two, but when you move the gimbal to much more aggressive angles that’s where you begin to feel the smoothness and steadiness of the 32-bit board.

The top factor to consider when getting one of these gimbals is time. Getting them tuned accurately for your camera and lens combination might consume a lot of time.

There are some complex math calculations driving these motors to keep the camera floating efficiently. It can consume a lot of time in testing and retesting in order to make the camera move smoothly.

By far, the coolest one to tune is the Came-TV Single because it’s the only one to comprise of encoders. Encoders are accessories to each motor that almost make tuning non-existent if you possess the right lens camera combination like an a7S and the 10-16mm lens.

The EVO GP-PRO 3-axis handheld gimbal allows you to smoothly shoot a steady video with your GoPro. The EVO GP-PRO is compatible with all Hero 3, Hero 3+ and Hero 4 model cameras and provides support for majority of the GoPro camera accessories such as the LCD BacPac and the battery BacPac.

Once attached with your camera – a procedure that should only take a few minutes, just “plug in and play” since there are no software configurations or irritating camera balancing settings that can lead your stress levels into overdrive and you are prepared for action, presuming that you have charged the batteries up.

The GP-PRO comprises of an upgraded 4-way thumb stick to provide a more refined and versatile control of the gimbal’s pan, tilt and roll axes. This innovative feature allows you to enjoy extended flexibility and control for compacted shooting situations or for obtaining unique angles on your focus.

The EVO GP-PRO gives you further more adaptability with the accumulation of a 3.5mm AV audio/video output port that serves as an external monitor as well as a typical 1/4-20″ female thread on the bottom of the handle for adding the carbon fiber extension pole set or your usual monopod or tripod.

There isn’t any camera sliding as we normally see with other handheld gimbals. The tiny joystick built on the handle will take some time in getting familiar with, especially if you are a newbie to using gimbals, but you should get used to it after a few initial tries, and once you do, it is worth using for any action that you may miss if you leave the gimbal in a particular mode.

There are some limited differences with its earlier versions, the EVO GP and the primary ones being that the GP-PRO has a built-in connector thread at the core of the handle that allows mounting to other products.

Another important upgrade is the thumb joystick and the capability to catch up the gimbal to an external monitor.

The core frame of the earlier model hasn’t transformed much. The upgrades on this model are overwhelming and a great reason to buy the younger model.

Versatility: The EVO GP-PRO also features a built-in charging cable to increase your GoPro’s battery life. The mounting tray provides support for the addition of the GoPro LCD backpack and battery backpack if required.

The EVO GP-PRO 3 gimbal has an innovative 2-axis thumb control joystick added to the handle, which makes it extremely easy to “overrule” the gimbals setting whenever you need to.

The best feature on the GP-PRO is the mode versatility i.e 4 different operational modes that you can easily install from the mode setting button, on the handle.

All Four modes enable the users to witness a wide range of film shooting, regardless of the situation you would like to film, there is a mode that will perform the job.

We experienced each mode out dynamically, plainly EVO GP-PRO passed with flying colors.

Occasionally when you switch between dissimilar modes, or use the joystick you will observe a camera drift in your footage, but EVO have succeeded to make that a past flaw with this wonderful device.

Unprecedented Warranty: The EVO GP-PRO originates with a charger, USB charging cable for Hero3/4, and a couple of 18650 Li-Ion Batteries that work fine for 4-5 hours of extended battery life and is assisted by a 1 Year USA Parts and Labor Warranty

Mode settings – 4 and 2 different modes on the thumb joystick

Mountable – Built-in thread to mount to lots of different devices

To conclude this review on EVO’s GP-PRO handheld gimbal, we can say it’s possibly the best gimbal we ever used that is well-suited with the latest Gopro Hero cameras.

On account of the 4 modes and the little thumb joystick, it gives the impression that EVO have considered everything possible to not only deliver with the camera images but also with the user experience.

Starting from the moment you take the gimbal out of the box you will be impressed by the quality and everything subsequently, including connecting your GoPro to the device, transferring between modes when shooting, down to the mounting thread and battery life is a joy to witness with this amazing gimbal.