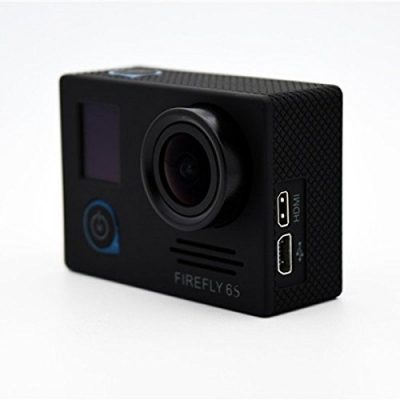 This is my unbiased Firefly 6S review, a cheap Chinese action camera that is claimed to shoot 4K videos. Allow me to take you through the review with more details on the specs, features and quality.

When talking about action cameras, GoPro first comes to mind especially with their newest GoPro Hero5 series that has enhanced features and overall improvements from their previous models. GoPro cameras of course come at a cost since you’re not only buying an action camera but you’re also buying a brand name that has proven to be number one in the market.

However, many small Chinese companies started to enter the action camera market a while ago and I wouldn’t say that they’re competing with GoPro because they simply cannot compete. But why? well GoPro has built a strong reputation over the last 15 years manufacturing high quality cameras wanted by extreme sports enthusiasts all over the world.

These small companies are trying to re-create a copy of the GoPro camera at a much lower price but of course with lower quality and less features. Not all cheap action cameras are low quality, many of those really perform well especially these cheap cameras for under $100. And one of those is the Firefly 6S 4K action camera.

The Firefly 6S is a successor of the 5S, a well performing camera that I owned and liked. They both look the same from outside but they have differences in hardware which led to enhanced video quality. On the paper, the 6S can shoot in 4K. That’s huge for a camera that costs less than a $100, right? Let me tell you why it isn’t in the next section.

Many people want a GoPro but some cannot afford to buy one, that’s one of the reasons to look for other alternatives and I want to help you find the best one for your budget and needs.

I don’t want to compare the Firefly 6S to any GoPro because it wouldn’t be a fair comparison. However if you have experience with some of the other cheap models like the ThiEye i60e or the Polaroid Cube+ then the 6S will definitely compare to these.

If you have owned any of the GoPro models, you will notice the similarity in design between the GoPro and the Firefly 6S camera. Its looks more or less like a standard action camera and pretty similar to the GoPro Hero4 series. It has a basic and compact design which makes it neither big or small.

I think they did a good job designing the camera, and used the usual rubber coating you find on other cameras. This rubber coating helps with the grip while also preventing the camera to slip off your hand when in action. The 6S has a wide angle lens and comes with a small screen at the front however no LCD at the back.

On the back, you have the battery, it’s detachable and its design looks similar to the GoPro Hero3. At the bottom, you have the memory card slot. On the side, there’s a USB port used for charging and transferring files and a mini HDMI out port used to connect the Firefly 6S to a TV/monitor or  maybe even use it as a dash cam or a webcam.

I’m not sure why they didn’t include a cover for these ports and it’s something I didn’t like because these ports tend to accumulate dust and dirt over time especially when used without the housing.

I think one of the drawbacks in the Firefly 6S is the lack of a LCD screen at the back, unlike the ThiEye i60e which comes with a LCD, the 6S has a detachable battery at the back. But that doesn’t mean it’s of a less quality. On the contrary, the 6S proved to have higher video and photo quality and I will go into more details in the next section.

Controlling the camera can be a bit confusing mainly because of the lack of an LCD screen at the back. Even with the front small screen, it’s not that great. This is an example of how the price difference makes an impact on these factors, and maybe here you will start to appreciate more the GoPro cameras even-though it comes at a higher price.

The power button at the front is used to power off/on the camera and switch between photo and video modes. The upper shutter button is used for taking photos and videos as well as confirming options inside the menu, so it can act as a ‘OK’ button as well.

There are also two buttons at the side with Up and Down arrows, they are used to toggle between the menu options and used to turn on the WiFi.

The 6S doesn’t include a memory card in the package. So investing in a good and fast memory card that can handle 4K videos at the time of purchase is a wise option since you won’t be able to use the camera without one as these action cameras don’t have any internal storage.

The specifications for the Firefly 6S are similar to other cheap action cameras like the ThiEye i60e on paper but the difference can be seen when both are put to test.

Practically, the Firefly 6S does a good job in 1080p. The camera can adjust well in different lighting conditions and the colors are not bad either. I noticed that the sharpness decreases in some shots especially when I’m shooting a far away object.

I would like to add that the 6S doesn’t have a recording indicator and sound indicator which makes it difficult to know if I stopped or started recording. So I have to look at the LED light at the shutter to know the status of the recording.

Ok, let’s move to the 4K resolution. Do you think a camera this cheap can really shoot in real 4K? well,  the answer is no, it can’t. But why?

However the 6S, has 2880 x 2160 resolution so it’s not real 4K because it has less pixels horizontally. I would call this a fake 4K. So the promise of delivering 4K resolution is only on paper and it fails to achieve that when we put it to the test.

That’s the compromise you get when buying a cheap camera. They try to compensate in different ways whether it not shooting proper 4K or not getting an LCD screen.

It does good it all other resolutions compared to its price so if you don’t really care about that fake 4K resolution then you should be good to go. But if you want real 4K then you should go toward the GoPro Hero 5 Black that offers a lot of amazing features.

The manufacturers of the Firefly 6S claim that it has a 16 megapixels sensor for photos but that’s also is not correct. I found this a lot in different Chinese manufacturers, they do that to deceive their buyers thinking the cameras can shoot very high resolutions. The 6S has a 12 megapixels sensor and works well, it is a Sony IMX078CQK image sensor.

I personally liked the quality of the images, the colors and sharpness are good, it can be a bit more vibrant. The camera struggles with exposure when it faces a bright light. They have improved this through some firmware updates.

Other options includes WDR which serves well in low light, Burst mode which can take 11 photos with 1 shutter click and Continuous mode which takes photos at an interval you specify. There are also ISO and Sharpness options to better enhance the photos.

The 6S can take up to 64GB TF memory card and it’s sold separately.

The Firefly 6S comes with a lot of accessories in the box. You have the standard accessories that come with most of these cheap cameras so you don’t have to worry about the small accessories.

On the other hand, the Firefly 6S is not waterproof and it comes with a waterproof housing down to 60 meters. Not only does that make it perfect for photography on rainy days, but also allows you to capture your underwater experience without any worry.

Here’s a video shot with the Firefly 6S:

When we talk about action cameras, we tend to think of GoPro and I think we always should. All these cheap cameras promise us with a lot of options and features that most of the time are not true.

On the other hand GoPro has always provided what it promised and that’s quality and excellent customer service.

The Firefly 6S is a good camera for its cheap price that comes at a third of the Hero5 Black price. I wouldn’t use the 4K resolution myself and I would stick to the 1080p which is great.

It’s understandable that the manufacturer had to sacrifice top-of-the-line resolution quality for a budget product, the fact that it over-promises and under performs, makes the brand a lot less reliable in the eyes of the average customer.

If you’re on a budget and would like to own an action camera or you just need a spare one then the Firefly 6S can do the job really well.

There you have it folks! What do you think of my Firefly 6S review? Would you buy this camera? Let me know in the comments section below:)