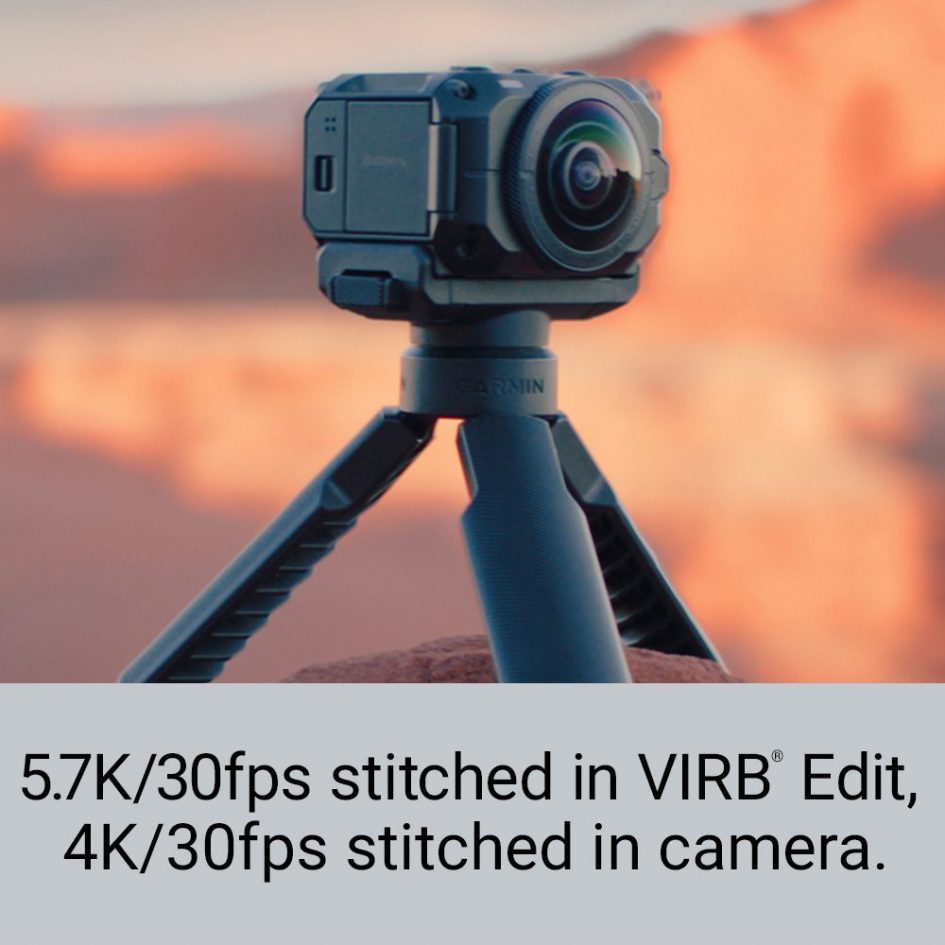 The future of preserving memories is finally here, thanks to the rise of 360-degree camera. 360degrees photos are a whole new medium, not just panoramas. The way you view and preserve your memories will completely change especially after checking my below Garmin VIRB 360 action camera review.

So, what exactly is a 360-degree camera? 360 cameras are designed to combine two fisheye camera lenses into a sphere that captures everything around with just a click of a button.

Even though the usual GoPro cameras have already stolen the hearts of many, 360 images cannot be compared to normal digital images.

These are a complete game changer. This is not just about capturing selfies anymore because you get to capture yourself, as well as everyone and everything else around you.

This camera captures the moment almost in real time because everything is included in one shot. When you look at these images, it’s almost as if you are experiencing that moment and if you look at them on a VR headset, they look absolutely amazing.

If you love to travel and extreme sports then this is a must-have device!

First Things First: There are Two Main Types of 360 Videos

This is the most common type of image found in YouTube and Facebook or on Google Street View. These images are 360 rendering of a shot and can be viewed either on a VR headset or any kind of screen. These images can be moved around the space but they lack real depth perception.

These create the virtual reality element by creating 3D rendering of the shot using separate inputs for each lens. This is the kind of immersive content that is shot with two lenses and viewed in 360 using VR headsets.

What to Look For When Buying a 360 Degree Action Camera

To get the best 360-degree action camera, it is imperative to consider a number of factors to get value for money. Here are six factors that you need to put into consideration when making the purchase.

Virtually all the 360-degree action cameras in the market have a minimum of two lenses. Two aspects about lens that you should consider are shutter time and ISO range. The two will help you to know if the camera has the capacity to meet your filming and photography needs amicably.

FPS is another major factor that you need to put into consideration before making your final decision. Some of the top rated cameras in the market have the ability to capture a maximum of 50 frames per second. If you are on a tight budget, it is recommended to go for a camera that has an FPS of at least 30.

Check the total amount of images and videos that the camera can hold at any given time. You don’t want to run out of storage when you’re out shooting videos by using a small memory card.

The battery needs to support all the multiple cameras and so it is imperative to choose a 360-degrees action camera whose battery can last for several hours.

Check the battery life specifications and compare them with the amount of duration per shooting session to make the right decision. Ideally, the battery should last for at least one hour so that you do not have to recharge it in-between a shooting session.

Go for a camera that has a compact design to be able to carry it when going on vacation or outdoor expeditions. A large camera rig that is heavy may not be the best option if you will be carrying the camera around frequently.

The rule of the thumb is; consider the cost benefit of purchasing a portable camera based on the convenience factor versus a large camera for its image quality.

After trying out multiple 360-degree action cameras in different settings, I can confidently confirm that Garmin VIRB 360 is one of the best in the market along side the GoPro Fusion. To help you understand what informed my decision, I look at a number of primary factors that gives it an upper hand in the market like:

Let us dig in and look at each of these factors.

Most people are fine with 4K Ultra HD resolution but for VIRB 360 action camera’ advanced users, the 5K resolution comes in handy, and it is only available in RAW video mode.

This way you can record high-quality footage in all directions capturing the highest level of detail. The VIRB 360 captures different hemispherical footages with each lens.

You can use third-party video editing software such as Mettle, VideoStich, and Autopano just to name a few, to stitch them into one spherical video. However, Garmin is working to update their VIRB Edit to provide a one-stop software to stitch all your RAW videos.

With that in mind, the VIRB 360 camera works harder while shooting in RAW video mode and this means that you will get reduced battery life, ability to shoot in extreme temperature conditions as well as better SD card recording time.

Shooting 5K videos for a long period of time can cause the camera to slightly overheat and to avoid damage; it shuts down when it crosses the temperature threshold.

The VIRB 360 has dedicated video and camera buttons, and this eases the process of toggling between the two modes like in most of the market competitors.

Simply press the button with a camera symbol or select ‘Photo Mode’ on the Garmin VIRB app and choose between the various image-capturing modes such as a photo burst, a single photo, as well as time-lapse photos. For this, you can choose between the modes on the camera or use your Garmin VIRB smartphone app.

The VIRB 360 is arguably one of the best 360 action cameras on the market right now taking some of the highest-quality photos.

It, however, does not perform well in direct sunlight, as you will see streaks of sunlight in your photos as well as a chromatic aberration on the top part of the pictures.

The exposure balancing takes a while in calculating the differences while taking multiple action shots.

Despite the VIRB 360 being waterproof, it is not of much use underwater. This is due to underwater refraction, and you will miss objects moving along the stitch line.

If it came with corrective lens, then it would have been amazing for underwater use.

You can control the VIRB 360 using voice control, remote control or manually. For remote control, you need a VIRB Remote accessory that mounts onto the camera, and it is controlled using ANT+ wireless technology.

It has dedicated buttons to start/stop recording footage as well as take pictures without having to look at the remote. You also get remote control of the VIRB 360 using any of the Garmin devices that have the remote feature such as motion sensors, navigation devices, smartwatches and more.

With the Garmin VIRB app, you can remotely capture video footage and high-resolution photos. Once you have the footage or photo, Garmin has made available the on-screen pro settings that allows you to adjust the photo to your preferences.

You can download the app from Google Play Store and Apple App Store. With the app, you can also stream your recording live on YouTube or Facebook if you are using an iOS device.

Best of all, you can preview your image or footage using the app’s 360o viewfinder. The app is compatible with iPhone 4S and newer versions as well as devices running Android version 4.4 and above.

No matter the device you are using, you get to apply G-matrix data overlays with a single tap on the app.

Garmin VIRB 360 is one of the few cameras that allow you to connect to a Wi-Fi network. However, connecting to an unsecured public network exposes your sensor as well as video data to other users on the network.

Use the Garmin VIRB app’s viewfinder to locate and connect to the nearest Wi-Fi access points.

You can use the Garmin VIRB app, to connect the VIRB 360 camera to your home or business Wi-Fi network. While on the network, you can view the footage from the VIRB 360 on your smartphone app in real time without much delay.

Both the Garmin VIRB app and the VIRB 360 store the network login information allowing you to connect automatically to the network when the camera is within range and turned on. You can save multiple networks and select your preferred Wi-Fi network from the Wi-Fi menu on your camera.

The VIRB 360 is a tiny camera and that is why you need accessories to get the best footage or photos every time. Here are the must-have accessories you ought to expect from the VIRB 360 camera packaging.

There is a wide range of accessories that will help you capture the best images or videos with your VIRB 360. A tripod is definitely the first thing you should get.

Now, when getting a tripod for your VIRB 360 degree camera, you need to remember that the camera captures all around it, even underneath where the tripod is.

Normal tripods come with large legs that will be too obvious with such a camera. You need to get one with shorter legs and one that has nothing sticking out at the top.

With a VR headset, you will be able to watch your images and videos virtually, the way they are meant to be seen. Virtual reality is actually one of the major reasons why the VIRB 360 degree camera have become so popular. Besides that, you get to play VR games and watch movies with it as well; it is a win-win.

Garmin VIRB 360 camera produces very huge files, especially those in the 4K, 5K or more range. Different cameras come with different memory sizes but regardless of what you get, a memory card will really come in handy. Try to get one with at least 128 gigabytes if you do not intend to run out of space any time soon.

With the multiple lenses that come with the VIRB 360 camera, the vulnerability is very high and you need to protect yours. Get a carry on case to protect the camera when transporting or storing it.

Most cameras are sold with small bags but if you intend to travel or track outside then make sure to protect your precious camera.

Here’s a YouTube video by RIZKNOWS showing the Garmin VIRB 360 in action:

Garmin VIRB 360 is a reliable 360-degrees action camera that you can count on to capture top quality pictures and videos. The only downside is that even though it is user friendly, you will need to spend some time learning how each of the features works to get maximum utility from it. That is not a deal breaker though, in my opinion the camera is worth the price.