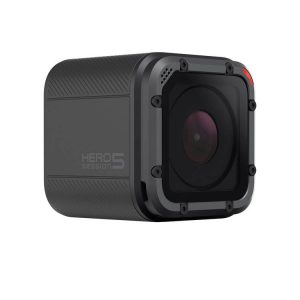 Learn more about the best budget GoPro camera in 2017 by checking my below detailed GoPro Hero 5 Session Review.

It’s not often that you get to see a GoPro camera not performing well in the market. Launched at the same price as the Hero 4 Silver (which performed pretty well), the GoPro Hero 4 Session failed to make it big despite getting its price slashed quite a few times. Sleek looking or not, the budget camera’s failure to find its footing came as a rude shock to the company that has been scaling heights rapidly in this market.

Fortunately, GoPro learnt from the experience. With their new line of Hero products, they did away with the Silver counterpart to the Black model, and kept only the Session variant as the budget option. Vastly improved from its predecessor, the Hero 5 Session now defined the specifications for an entry-level action camera.

Hero 5 Session brought 4K recording to the table, along with several other improvements over the Hero 4 Session. The former now has a 10 MP sensor (Hero 4 Session has 8 MP), high bitrate of 60 Mb/s (as opposed to 25 Mb/s in Hero 4 Session), voice control feature and image stabilization (both being absent in Hero 4 Session).

It’s, therefore, understandable why the Hero 4 Session is rated so poorly, especially now that the Hero 5 Session has come to the market. A detailed review of the latter will clearly demonstrate why it is considered a benchmark entry-level GoPro in the market currently.

The design is simple, cube-shaped, weighing no more than 74 grams. It has a monochrome display on top along with the Record button. There’s also another button for switching shooting modes at the back. Not surprisingly, the budget model doesn’t come with internal memory. So you will need to shell out a few bucks more to buy a SD card (it supports memory card up to 128 GB).

The Hero 5 Session, like its Hero 4 counterpart and Hero 5 Black, is waterproof up to a depth of 10 meters; so you do not need to use a waterproof case if you are simply going to the pool. Unfortunately, the Hero 5 Session comes with a non-removable 1000 mAh battery, which implies you cannot carry spare ones during travel. GoPro, however, claims that you can get a full charge via the USB Type-C cable in just over an hour.

One of the major improvements that the Hero 5 Session boasts of is the 4K video recording capability. It can record 4K at 30 fps and 2.7K at 48 fps, and tops out at 60 fps for 1440p, 90 fps for 1080p and 120 fps for 720p. It comes with Electronic Image Stabilization (EIS) which does a great job in negating camera shakes. In addition to Wide and Medium modes, Superview, Linear and Narrow fields of view are available too. The low-light performance is slightly poorer than the Black model, but it’s still good enough.

You can now click 10 MP stills with the added option of 30 photos per second in burst mode. Colors are vibrant, but many users have found the images to be lacking in finer details. Unlike the Hero 5 Black, it does not possess the RAW export feature.

The sound quality is particularly better, courtesy the dual microphones and the improved noise-wind reduction. The audio is now much clearer and louder, especially because it is no longer getting muffled by a waterproof case.

The Hero 5 Session works perfectly via both Bluetooth and Wi-Fi. You can pair the camera with your Android or iOS GoPro Capture app in order to remotely control the camera in a hassle-free manner. You can power on your Hero 5 Session, alter camera settings and do a lot of other cool stuff through your smartphone.

The delay from the live view is so small that you may not even notice it. Also, you can access the Quik app if you want to have a prompt edit. The desktop software is pretty basic, but does everything you would want it to do without too much trouble. It’s not perfect, but if you are a novice in video editing, you may find it as a good platform to start off. You can check my list of the best GoPro editing software you can use with your GoPro footage.

Like all other GoPro cameras, the battery life depends on the video mode you’re using. If shooting in 720p, the 1000mAh battery will last around 2 hours. The higher the resolution, the faster the battery drains. Here’s a comparison table on the GoPro Hero5 Session battery life. Like its predecessor, the Hero5 Session has a non-removable battery; so there’s no question of using spare ones once you run out of juice.

The Hero 5 Session does not come with a lot of accessories in the box. Along with the standard low-profile mount, and flat and curved adhesive mounts, the box includes a mounting frame for a standard GoPro mounting point, and a ball-head mount that allows you to easily adjust the camera angle and spin it around according to your needs. The camera is waterproof in itself, so you don’t need a case to protect it underwater unless you are going deeper than 10 meters.

The Hero 5 Session is undoubtedly a much better camera than the Hero 4 Session. If you still own a Hero 4, it’s definitely time for you to upgrade to the Hero 5 Series. The improvements are pretty mind-boggling, especially the true 4K resolution recording that few other companies bring to the table.

However, if you have a few more bucks to spare, you may consider the Hero 5 Black version instead. Not that the Black model is leagues ahead of the Session – it practically shoots at the same top-level resolution – but it’s still more capable than the Session with features like RAW export and better still image capturing power. Further, the Black version is far more versatile in regards to frame rate options for the different resolutions.

At the end of the day, it’s up to you whether you think upgrading to the Black version is worth it or not. The Hero 5 Session is a thrilling piece of technology on its own, and is definitely the best budget GoPro camera available in the market currently. Here’s a YouTube video from PCmag testing the Hero 5 session in 4K at 30fps, check it out:

I hope you liked my GoPro Hero 5 Session review! Please let me know if you have any questions by leaving a comment in the comments section below! 🙂
Tweet
Pin2
Share2
4 Shares