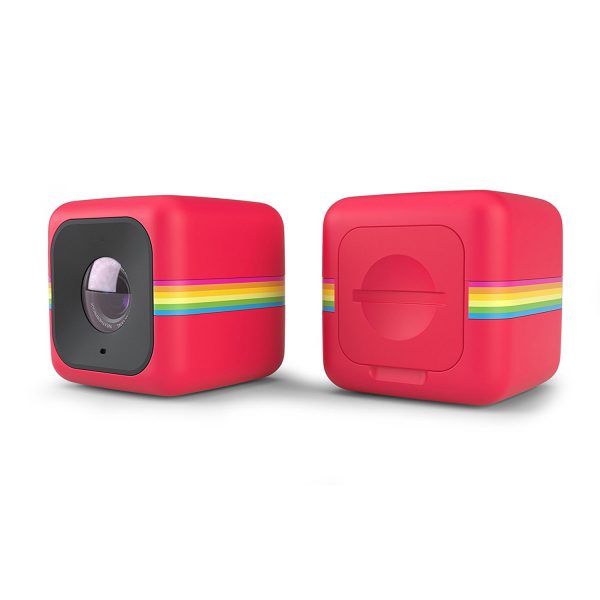 When you hear the brand Polaroid, you might think of the old vintage film cameras, negatives and photo processing. I personally never thought that Polaroid would enter into the action cameras scene with all the big names like GoPro. Until I saw the release of the Polaroid Cube which is the predecessor of the Cube+, they kept the same design in the plus however the specs have improved.

These are the only two action cameras created by Polaroid, unlike GoPro which offers more options at “of course” a higher price. In this Polaroid Cube+ review, I will go in detail about this tiny action camera, provide an overview as well as the specs, video and photo resolutions and other functionalities.

Let’s Jump to The Review!

When looking at the Cube+, its shape is pretty similar to the GoPro Hero 4 session. As I mentioned earlier, they have kept the same shape/design from its predecessor the Polaroid Cube that was released in 2014, around a year before the Hero4 session. I wonder if GoPro tried to copy the same design in order to compete with Polaroid on this range of cameras since it has a good price, small shape and good specs.

The Cube+ size is 35x35x35mm which makes it really small in size, lightweight and can fit literally anywhere so I don’t have to worry about extra weight when traveling like I do with the bulky DSLR. It comes with a variety of colors from black to red and blue. It has a wide angle lens and can shoot up to 1440p, it has WiFi capability that can be used to connect to a smartphone app. It can also shoot time lapse photos.

This tiny camera can shoot up to 1440p at 30 fps (frames per second) which is good enough especially looking at its small size, it can also shoot at 1080p. The . I usually shoot at 1080p but the 1440p can be useful on many occasions. There’s a switch where I can toggle between different video resolutions. Photos are shot at 8Megapixels, it can also capture time lapse photos. Another extra useful feature is the image stabilization that helps get crispier quality caused by a shaky hand or when shooting on the move.

Another feature found a lot in various action cameras is the wide shooting angle or the fish-eye effect. The lens on the Cube+ is wide with 124 degrees and can cover wider photos and videos. It does auto-focus and this can’t be changed manually, same like other action cameras. Exposure and ISO are also automatic. But that doesn’t mean that it can’t take beautiful shots, on the contrary, I liked the quality but it can be better especially when comparing it to the Hero 4 Session. With the Cube+ you can sometimes notice a slight distortion on the edges of the photos and videos.

The Cube+ has a built-in microphone that provides acceptable audio quality to the video footage, it’s not wow but it does the job especially since the update that was released by Polaroid to fix the sound issues as it was very low.

For the memory, it has a microSD card slot at the back just under the protective cover and next to the charging port. It supports up to 128GB microSD cards which is a good advantage for people shooting for several hours like time lapses. Even with the good capacity memory card, the videos are not as large as you expect since the camera does compress them a bit which takes less than usual space from the memory.

As I just mentioned, there are only two buttons on the camera which is better in my opinion as more buttons will just complicate things. The big button at the top is the shutter button, if pressed once, the camera will take a still shot and if pressed twice, it will start recording video. Changing video and photo modes can only been done via WiFi through the Cube+ phone app. The second button has the WiFi logo and that turns the WiFi On or Off. There’s also a magnet at the bottom to help fixing the camera on metal surfaces.

Unlike its predecessor, this tiny camera has WiFi capability that allows me to stream my footage in real time to an IOS or Android smartphone using an app. I can also frame my shots and record the footage straight from the phone which I find quite flexible. Controlling the video modes and resolutions is done through the app as well, the camera has only two buttons, shutter and WiFi.

The Cube+ has a rugged rubber like material from the outside that make it a bit of a shockproof camera. Polaroid has kept the same design as the Cube adding a bit more protection to the back door. It is weatherproof but not waterproof. To make it waterproof, a separate case must be purchased so it’s not included in the box. It also has a lot of mounting accessories that can be used along with the case.

The built-in battery on the Cube+ lasts around 1.5 hours without WiFi. With WiFi it will go down to around an hour. Not much I would say and it can be an issue since the battery is built-in and you can’t just replace it. So if you’re willing to shoot continuously for a couple of hours, the Cube+ might not be the best choice.

What I liked, Polaroid Cube+ Pros?

In my opinion, the Polaroid Cube+ is a good camera looking at its low price and what it offers in terms of modes and functionalities. It can be a great action camera for someone looking to get his hands on a cheap but well known brand like Polaroid. I can say that it can be worth the small investment if you’re on a budget and not looking for something too fancy but does the job. I’m sure Polaroid is working on a new model that will be more powerful and has more functionalities now that Hero 5 Session was released by GoPro.

I hope you liked my Cube+ review, please let me know if you have any questions by leaving a comment in the comments section below 🙂