How to Use an iPad as a Phone, Easy Steps 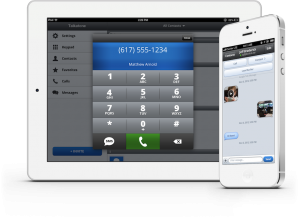 Did you know that you can use your iPad to make phone calls?

I will show you today five easy methods on how to use an iPad as a phone. I’m sure that many of you, like myself, would like to get more usage of their iPad. Yeah it is a big screen but who cares, nowadays, the bigger the better, right?

There are a number of ways to make calls using your iPad and I will go through each one and explain it in detail. Some of these methods are free and some other are paid, so you pick your most convenient method.

These methods should work on any iPad, I personally tested these on iPad mini, iPad (4th generation, Air and Air2)

This method is the most exciting one, you can basically use your iPhone to make calls through your iPad. There is a feature on your iPhone that gives you the ability to sync calls to your iPad.

What happens is that these calls get routed from your iPhone to your iPad, so you can use your iPad to place and receive calls from the contact list you have on your iPhone. Here’s how to do it:

1- On your iPhone, go to ‘Settings’-> ‘Phone’->’WiFi calling’-> Turn it ON (Depends on carriers, this is not supported in some countries)

3- Once you turn on ‘Call on other devices’, you will see the list of devices. Choose your iPad from the list. (make sure you’re connected to the same WiFi on both iPad and iPhone)

Facetime is Apple’s video/audio calls application, you can find it on every apple iPhone/iPad. if both caller/receiver have facetime then you can do free calls using this app. Facetime uses your apple ID to make calls, so the other person should also login with his apple ID.

You can choose between video and audio call, if you wish to use only audio then click on ‘audio’ to place a regular call.

As I said Facetime doesn’t use your phone credits, it uses cellular data or WiFi, so all calls you make are free of charge.

This method works not only on iPads but on iPhones, iPods and Android devices too! It will allow to do FREE and UNLIMITED calling and texting within the US. Given the big screen and extended battery life of the iPad, it would be cool to use it as a phone. This method will use either WiFi or cellular data (considering you have the iPad 3G/4G with SIM card capabilities).

Google Voice doesn’t support calling feature over data and only uses your phone line and that’s not possible with an iPad, it will allow you to receive voice mails and text messages. To get around this issue, you would need to get Talkatone app as well. The good thing about it is that it integrates with Google voice account and it can also sync with your Facebook contacts.

1- Download Google Voice and Talkatone from Apple’s app store. As I mentioned earlier, you would need a number to use Google Voice so either get a new number or port your existing one.

4- When you need to make a call, you can either choose a contact or enter the phone number manually using the keypad. Of course, you can also send and receive text messages.

As I said earlier, you will be using WiFi or data when making calls/texts, so it’s completely FREE.

For more details on how to use Talkatone, you can follow the instructions on this link.

Everybody knows Skype, the famous VoIP app that can be download on all platforms (Windows, MAC, IOS, Android..)

Calls from Skype to phone numbers aren’t free unlike the methods I mentioned earlier, however, Skype-to-Skype calls are absolutely free considering you and receiver both have the Skype app installed on your devices.

In case you need to call someone who doesn’t use Skype, then you would need to buy Skype credits to be able to make calls to a phone number.

The charges are acceptable and not very expensive, so if you’re considering calling from Skype to phone numbers, you may need to buy credits in order to use this feature. The advantage of Skype is the ability to call international numbers so you’re not limited to US like Google Voice and Talkatone.

Vonage is another free app that enables you to make Free calls using your iPad. Vonage is similar to Talkatone as it works for users calling from US and Canada.

The easiest way is to use with Google Voice, because you need to have a number to be able to make calls. I personally use my Google Voice’s number and it works perfectly. It also works on both WiFi and data packages.

Here’s a quick step by step on how to set up Vonage:

1- Download Vonage from the app store from your ipad.

2- Open the app and input your Google Voice phone number and your email address. An SMS will be sent to the number you provided

3- Get the verification code from the received SMS and put in your Vonage app then click ‘Finish’.

4- You will now be able to make free cals using Vonage.

This is an easy set up and takes only a couple of minutes to get everything working.

Which method should you use?

I personally use an iPad Air with Google Voice, Talkatone and Skype and all of these apps work really well. I like the big screen and the battery life of the iPad and I save a lot on credits since I’m using calls over WiFi. So which one should you use? Well, it’s really up to you, you can check which method suits best your needs.

I have provided you with as much detail as possible on these five methods, it’s now up to you to decide. All of these apps work great with the iPad, and who doesn’t want to make free calls anyway? 😉

Now that you know how to use an iPad as a phone, grab your iPad and give these methods a try!