GoPro Hero 5 Black Review, How good is it? 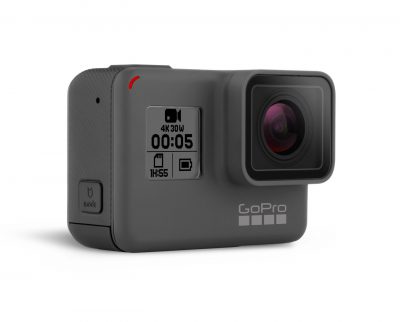 Action cameras can be your most valuable companions during scuba diving expeditions and skiing adventures.

Not only do they allow you to capture the entire experience while living the moment, but also turn out to be reliable in the most extreme of conditions.

These cameras are lightweight, compact and rugged, and offer the best means of capturing memories in a beautiful way so that you can relive them at a later date.

If you are interested in action cameras, it can be safely assumed that you have heard about GoPro.

They are one of the largest manufacturers of action cameras with a line of products that guarantee reliability, longevity, and impeccable performance.

The only issue with GoPro products is the price. Unless you are obsessed with new technology and have the bucks to spend, it is probably sensible to buy cameras from other companies with similar specifications but at a significantly less price which you can afford.

However, despite being dear, it is unanimously acknowledged that GoPro cameras are worth every dollar.

Considering their zeal to develop and improve with every product release, you can blindly trust GoPro to bring the latest technological advancements into their newest products and if you haven’t heard yet, they also have a drone called Karma which is compatible with Hero5 Black and Hero4 Silver and Black.

It’s not without reason why the GoPro Hero5 Black is rated so highly among experts.

Built along a massively successful recipe, this camera contains all the best features of its predecessors as well as a horde of exciting new functions.

Let us look into the details to know more about the Hero 5 Black,

If you own a Hero4 Black, you are sure to notice the slight increase in size in the Hero5 Black.

There’s the familiar rectangular shape, but now the corners are more rounded, and the rear face has a 2 inch touchscreen display.

It’s nice and compact like all other GoPro cameras, and feels great to hold, thanks to the rubbery coating.

This design also has another benefit – it makes the camera shockproof.

One of the biggest benefits of owning this camera is that it doesn’t require a waterproof case unless you are going deeper than 10m.

Doing away with the waterproof case has its own advantages – it makes for a smaller and lighter camera (this one weighs only 118 grams as opposed to the Hero 4 weighing 150 grams), and vastly improves the audio capture performance since the microphones are no longer encased.

If you have any experience with other GoPro models, you are probably aware of their obsession regarding the three-button setup on their products.

Thankfully, the Hero 5 Black does away with that trend. It comes with a versatile Record button on top.

You have to press it in order to turn it on and start recording, and press it again to stop and turn it off.

A small shooting mode button is present on the side which can also serve as the Power button.

The LCD display is bright enough for outdoor usage. The size could have been made bigger at the cost of the thick bezel surrounding it, but that’s not really an issue.

The touch-based control of previous models has been replaced by more intuitive and user-friendly interface.

It now involves swiping in and swiping out, just like you would do on a smartphone.

It also allows you to lock the touchscreen whenever you want to – a useful feature to have when you are going underwater.

If you are serious about your photography and have been longing to own a camera that permits you to be more creative in post-production, here’s the one for you.

The Hero 5 Black has some delightful improvements on the pro tuning that let you have complete authority on the shutter speed.

In addition to this, the RAW format mode makes it exceptionally convenient for those who know their trade.

<<Check my in-depth comparison of the GoPro Hero6 and Hero5>>

The only apparent cons are that the touch detection may seem to be on the slower side, thereby resulting in unintentional double clicks, and that swiping in from the edge while the camera is on mount is a bit problematic.

Of course, there’s the impressive voice control feature that you may take full advantage of.

This is particularly useful when you are away from the camera or your hands are occupied.

The fact that the Hero5 Black can understand commands in as many as seven different languages makes it a fantastic product for anyone around the world.

Understandably, louder environments may lead to sporadic success in voice control, but once the camera hears your command, you can trust it to do the precise action within seconds.

A gimbal can be used as well if you like a more stable footage, you may consider looking at some of the newest gimbals for the Hero5 Black.

When we said that the Hero5 Black combines the best features of its predecessors into a single, compact camera, we did mean it.

All the video specifications from Hero4 Black are carried over. This implies that the Hero5 Black cannot capture 4K at more than 30 fps, in spite of all the improvements.

Interestingly, as long as one is shooting in 1080p at 60 fps or lower, one can enable the electronic image stabilization feature that compensates for camera movement by cropping into the image.

This may result in a somewhat floaty image at times, but the EIS is definitely a boon when you are recording at places prone to a lot of camera shake.

The Hero5 Black offers 12 MP photos that are sharp with crisp details and vibrant colors.

In addition to the RAW support talked about earlier, the camera also has a Wide Dynamic Range mode that lets you focus on more details across highlights and shadows.

If you prefer natural-looking images sans the curved lines brought about by wide-angle lenses, you can capture your photos in the new Linear mode.

Coming to the sound quality, the microphones function better than those on the Hero4 Black.

They can pick up more sound clearly, and the wind reduction does an amazing job in this case.

Not only do your videos look great, they now have a feeling of depth, courtesy the audio features.

You can still install an external microphone if you would like, to better enhance your recorded audio whether you’re using your GoPro as a webcam, for live broadcasts or any other activity.

GoPro’s companion app for Android and iOS, Capture, comes handy while saving your images and videos to your smartphone or tablet.

The camera allows both Bluetooth and Wi-Fi connectivity; so transferring files to your gadgets is not much of a hassle.

It is interesting to note here that the app allows you to grab still images from video captures, which essentially means you can get pictures at high resolution if you record your videos in 4K.

The evolution of Quik and Splice apps as an attempt to make editing and sharing images and videos is worthy of mention.

One can import several files through the Quik app which can then produce an edited video with impressive transitions and remarkable cuts to preset music.

As regards to the Splice app, it is only available for iOS users. Having said that, pairing through Bluetooth or Wi-Fi isn’t always seamless, and that is certainly a glitch that GoPro must work on in its future models.

The desktop version of Quik has a fancy update though. It now allows you to overlay telemetric data such as speed, altitude, elevation, distance, G-force, and GPS path onto your videos via GPS.

This is, of course, in addition to the basic geotagging feature that most action cameras nowadays possess.

If you would like to see other video editing options. make sure to have a look on my list of the best GoPro editing software.

Coming to battery life, the Hero5 Black uses a physically different battery than Hero4 Black, although both run out of juice in around the same time.

Unless you are planning to use your camera sparingly, it may be a prudent option to carry a spare battery around with you at all times.

Also, the charging port is of USB Type C variety which is the same as what newer smartphones have these days.

Make sure to check my tips on how to extend your GoPro battery life.

In summary, the pros of the GoPro Hero5 Black camera include amazing image quality, electronic image stabilization, dual microphones and an improved design that does not need a waterproof case (up to a depth of 10m).

On the other hand, battery life, poor touchscreen responsiveness, and lack of EIS while shooting in 4K constitute the drawbacks of this product.

Finally, it is important to evaluate whether this merits an upgrade or not. If you are still using a Hero 3, it’s time you invest in Hero5 Black.

Granted that it’s on the expensive side – and probably not the one for you if you are on a budget – but if you want a solid camera for your travels that caters to your photographic needs and gives you extra control over your images and videos, there’s not a GoPro model better than this.

It may not appear as imperative to upgrade if you are happy with your Hero4 Silver or Black, but the improvements, although slight, make for significant improvements in performance.

At the end of the day, it’s down to personal preference, for everyone has his own unique requirements, and nobody can understand your ones better than you.

I hope you liked my GoPro Hero 5 Black review! Please let me know if you have any questions by writing in the comments section below 🙂